The Paris Commune: ‘In future we will turn the guns on you’ 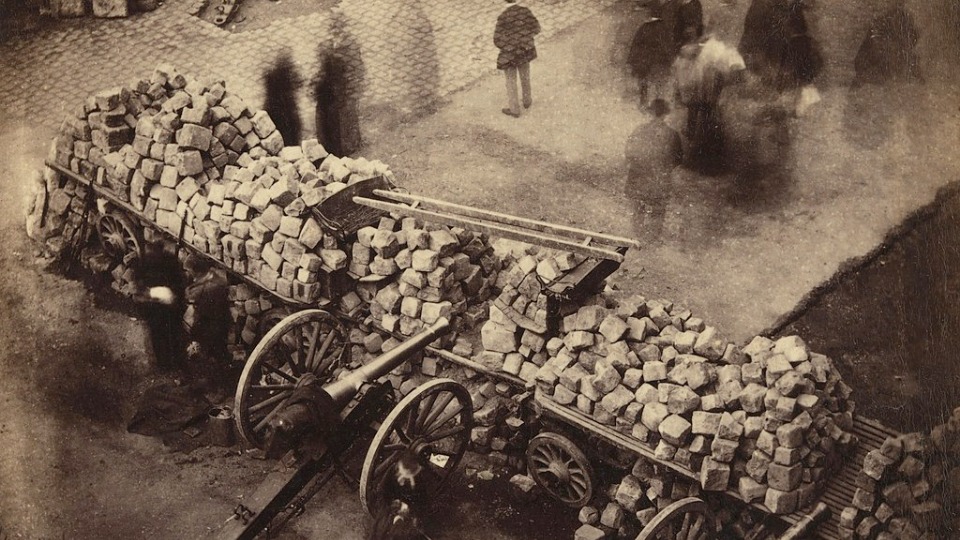 The Communards’ prized cannon behind the barricades in 1871. | Pierre-Ambroise Richebourg, CC0, via Wikimedia Commons

As we mark the 150th anniversary of the French proletariat’s heroic first bid to set up La Commune in Paris, let us examine German playwright Bertolt Brecht’s interpretation of this great event in his play The Days of the Commune.

The Commune broke out spontaneously on March 18, 1871. War with Germany, hardship, unemployment, and anger against the upper classes, among other things, drove the population of Paris to revolution and placed power in the hands of the working class and the petty bourgeoisie which had joined it.

However, when trouble came, only the proletariat in France stood by their new government; their bourgeois allies deserted it. This betrayal meant the Commune was doomed. The French bourgeoisie came together in a coalition supported by Germany’s Bismarck. On May 21, the army stormed Paris and killed thousands. By May 28, 1871, the army had defeated the Commune.

In 1948-49, after being hounded out of the United States by the House Un-American Activities Committee, Brecht adapted a play, The Defeat, dealing with the same subject and authored by the Norwegian poet Nordahl Grieg on his return from the Spanish Civil War a decade before. The political situation having significantly changed after the surrender of Nazi Germany, Brecht wanted to focus on the lessons from the defeat of the Paris Commune.

Brecht tells the story of the community around the seamstress Madame Cabet, who becomes involved in the revolution simply to survive. The people within the Commune briefly experience a new form of social existence The plot reveals both achievements and mistakes of the revolution. The people around Madame Cabet perish with the Commune. The new way of life is destroyed by the bourgeoisie’s use of merciless terror, which the Commune hesitated to use against its enemy.

Brecht’s play opens with the situation before the rising, on January 22, 1871. Bricklayer “Papa,” watchmaker Coco, and the seminarian François realize that the bourgeoisie are profiting from rising prices, while the National Guardsmen are dying defending Paris from the Prussians. The social conflict requiring the proletariat to take over the state becomes obvious.

The plot shows the steps the Communards take to begin a new life. A cannon acquired from army stocks to defend the working-class districts becomes a symbol of the armed working class. Madame Cabet in Rue Pigalle takes charge of it. The community guard it against attempts to remove it from them.

After the election of the Commune, “Papa” and others are persuaded the people have triumphed. At its first meeting, the Commune proclaims the principles of its future work: replacing the standing army with the armed people; the separation of Church from State; no night work in bakeries; all factories, which had been abandoned by their owners, to be handed over to workers; the salaries of civil servants not to exceed the average working wage. But the Commune lacks the resolution to march on Versailles or to occupy the Bank of France, the symbolic strongholds of power and capital. They do not fully understand the necessity of doing so. And so, Versailles unleashes a civil war on the communards. In Rue Pigalle, the neighborhood builds a barricade to defend their lives and the Commune.

Scenes involving the community of Rue Pigalle are at the heart of the plot. They show the old order replaced with new human relationships, yet stressing: “Never expect more of the Commune than you expect of yourselves.” Work and enjoyment are no longer divorced. The people as legislators see themselves as both working and enjoying life; they have adopted a new attitude to life. Bread and Roses too.

The communards, who have known nothing but violence and exploitation, wish for peace. They spare their enemy, because the new era seems incompatible with terror. Yet history necessitates the unequivocal assumption of political power under penalty of defeat. The communards are faced with this contradiction, and Brecht shows how they grapple with it and how they are destroyed.

This play could hardly be more topical now than it was when the socialist world was forming in the aftermath of the Second World War. It was immensely significant in 1970 Tanzania, where my father Jack Mitchell studied and performed the drama with his students, less than ten years after independence. Today, we witness the full and frequently militarized attack of the military-industrial complex on the peaceful working people of the world. As Brecht said: “The womb is fertile yet from which that crept.”

Resolution of the Communards